My petition is now (February 2020), being considered by the NZ  Parliament.

I have written yet another lobbying letter to support it.  In the letter I refer to an article by me published on the blog site of Karl du Fresne, a

well-known NZ freelance journalist. Here I suggest that human insanity is essentially a judicial problem  -  and not an health matter.

I am writing this letter in support of my petition, that of Andy Espersen and 261 others, at present before Parliament. You will agree that my petition also has high relevance to the repeal of the Mental Health (Compulsory Assessment and Treatment) Act 1992 and its replacement which has now been agreed to in principle by Government, following a recommendation from the recent Inquiry into Mental Health and Addiction. For practical reasons, in 1948 the treatment of schizophrenia was moved from Justice Department to Health department (as the Division of Mental Hygiene)   -  but not until 1973  did the mental hospitals come directly under the hospital boards.

I put it to you that for two reasons both organic and functional dementias fundamentally and essentially remain a judicial matter  -  it is not really an health issue. Firstly because it involves taking away the liberty of a free citizen  -  and secondly because both types of mental conditions are incurable.  The NZ Human Rights Commission tacitly recognised this when in August 2018 it drew attention to the fact that many people suffering from the senile dementias are illegally locked up and treated in our many dementia wards, now run by the private rest home industry.  Habeas Corpus principles are blithely ignored.

It follows logically that our treatment of dementia must be charitable  -  can only ever be charitable.  We do this by extending hospice care to its sufferers.

Traditionally, i.e. till 1992,  both functionally and organically demented patients  were committed to care in a court of law.  The 1992 Mental Health Act forces our psychiatrists to decide whether or not to apply the legislation in a particular case of dementia. This places an unfair burden on our psychiatrists and their DHB employers -  who now often find themselves facing legal proceedings for allegedly wrong decisions made. Before the legislation changes in 1992 Government shouldered that responsibility   -  as we had clear and unequivocal legislation governing these matters.

It is my belief that the 1992 Act is in fact illegal.  Legislation must treat citizens evenly and fairly, mental health legislation being no exception. The crucial question behind our original legislation (the Lunatics Ordinance of 1846) was the overarching importance of determining whether a citizen was demented or not.  If so, the law would apply  -  if not, it wouldn’t.

Karl du Fresne,  our foremost independent journalist and senior social and political commentator, kindly offered me space on his blog for publishing an article by me. This article is somewhat critical of Ron Paterson’s report  -   and calls for a public debate on the issue  (which, indeed, Paterson’s report also calls for). Sadly, this debate did not eventuate.  Here is a link to my article  -   with its ensuing comments :

I openly encouraged du Fresne’s readers to write comments  - and I forwarded the article to the Mental Health Foundation, hoping (in vain) for a comment from here.   These comments are most revealing and interesting, as you will perceive. Commenters agree with me that our chronically mentally ill sufferers experienced multiple, detrimental effects from the closure of residential, psychiatric hospitals in the 1990s  -  and  from the cynical 1992 change of philosophy dealing with them.

I respectfully request that Parliament now accepts this letter and my article (with its comments) as relevant evidence, and as a basis for discussion, in its deliberation on the forthcoming changes to our mental health legislation.

This petition is now closed

The NZ Mental Health Care Petition attracted 261 signatures.  It was handed to Nick Smith, MP for Nelson, on April 1st, 2017.

You may follow the petition through its stages on the NZ Government's official web site, www.parliament.nz/en/pb/petitions/

We, the signatories, respectfully request that the House recommend that the Government establish a Royal Commission

and on harm from the closure of residential, psychiatric hospitals in the 1990's.

The Select Health Committee's report is

now published –  read it here on the right.

I am grateful to the Committee for accurately and sympathetically reflecting my concern about the treatment of schizophrenia in New Zealand. However, the committee makes one fundamental error. Yes,  treatment of schizophrenic sufferers is certainly my concern  -  but no, the wording of my petition does not give voice to concern about present treatment.  Headlining the report is the Committee's interpretation of my petition,  “Request regarding care for people with schizophrenia”.   But my petition clearly asks for an objective assessment of the harm done by the 1992 Act to our schizophrenic population. I thought very carefully about the wording for my petition  -  and decided that first of all we need proof that the 1992 change of philosophy is indeed the singular cause for the pitiful outcome in the lives of so many more schizophrenic people today, compared to yesteryear.  Once this is established with some certainty, then Government will be obliged to put things right.  That was my thinking behind the wording. My petition is actually not a matter of health  -  but rather of justice and charity. I now intend to lobby Parliamentarians along these lines.

It will become overwhelmingly clear that the1992 Mental Health Act will need replacing.

Here in the document on the right, you can readsome suggestions for legislative changes

- together with some of my reasoning behind the suggestions.

Open Letter to Minister of Health

The Government Inquiry into Mental Health and Addiction has published its report. The Commission worked hard to create a 219 page document  -  and it is not my job to criticise their work.  I will concentrate on the only place where one of the recommendations from the Inquiry coincides with the aim inherent in my petition, namely repealing the Mental Health (Compulsory  Assessment and Treatment) Act 1992.  This would be the only really drastic proposal from the Inquiry.  But I find that the reasons given for this change are faulty and quite irrelevant.

Click on the document here on the right, where you can read my letter to Health Minister David Clark, concerning this aspect of the Inquiry report. Or click here.

Final submission to my petition

At long last the petition got its official hearing at  the Standing Health Committee.

I was approached by the Committee – they were very insistent that they wanted an oral submission from me. I was unable to go to Wellington – so they kindly arranged for teleconference with me from home.

The committee also told me that because of the complexities of my petition they wanted input from the Health Ministry. The conference began with my oral submission. Here I tried to explain the very basic grounds behind my petition.  I then took questions from members of the committee (about 10 minutes).   Dr John Crawshaw, Director of Mental Health at the Ministry of Health, then was on the mat; he was asked questions by several members, all referring to many of the statements that came with my petition (see my Appendices below).

This took about 25 minutes. Louisa Wall, chair of the Committee (and a member of the governing Labour party), then thanked me very much for all the work I had very obviously done with this petition  - and stated that possibly the Committee would contact me re the report to parliament they were now about to write.

So I keep my fingers crossed!

These three appendices accompanied my petition

My main explanatory submission to the Select Committee.

My complaint to Ombudsman as suggested by parliamentary rules.

The Ombudsman declined to deal with my complaint. I was advised to take my concern to our local MP.

"How the 1992 Mental Health Act has failed us". Click file above to read.

The oral address I would have made to the Select Committee, had I opted to appear in person for the Committee. 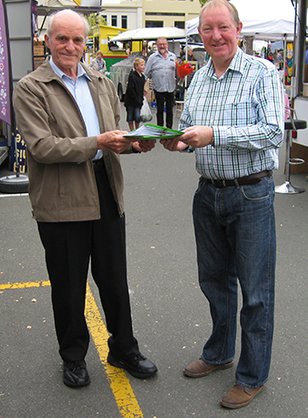 Nick Smith receives the petition from Andy Espersen at his stall at the Saturday Morning Market in Nelson.

The new Labour government has now opened their Ministerial Inquiry into Mental Health which, as I reported earlier, is similar to my petition.  It is their stated intention to investigate the current approach to mental health. Logically this cannot be done without some reference to the historical approach to mental health. With my lifelong work (since 1959) in the old mental institutions I am in a unique position to be able to draw the obvious comparisons -  my comments here do just that. Read more click on the file above.

After the NZ parliamentary election in September a new standing health committee has been formed. I have been advised that my petition has been reinstated with this new committee.  However, as our new government has decided to establish a ministerial inquiry into mental health, the similarities between this inquiry and my petition have caused the committee to wait for progress to be made on the ministerial inquiry before continuing to consider my petition. Read more - click here or on the file above.

Second submission to the

The inquiry is now arranging public meetings in all regions throughout New Zealand. Submissions  will close next month and the inquiry panel will then analyse them all and write its report to Government in October.  Their Nelson session was on May 3rd.  We were video-linked to a meeting in Blenheim – between us we were at least 200 people, far more than expected.  I had prepared a 15 minutes speech  -  but there were so many wanting to have a say at the meeting that I simply couldn’t fit it in.  I had printed off 60 copies which I handed out to people as they left.  Click on the document above to read the speech which I did not get to speak.

The NZ Press Council did not uphold my complaint against STUFF NZ for unethical journalism. This involved an article about a schizophrenic man’s visit to an Auckland library (Askhay Chand, the insane murderer of Christie Marceau in 2011).  Go to the Council’s website for details - here.

You can read my comments on the case in the document above or click here.

My submission to the Mental Health Inquiry Oct. 2018

My submission to the Mental Health Inquiry October 2018.  The panel is due to deliver its report to Government by October 31st, 2018.

My third submission to the Inquiry  is unusual.

It does not address any particular mental health problems.   Rather it questions the quality of the panel members.

or on the document above.